Raised Sourdough Donuts get their rise from natural leavening and are a great way to use your sourdough starter discard! They’re easy to make with a low-maintenance dough that comes together quickly.

I’m on a mission to make anything and everything I can out of my sourdough starter, and my brain is constantly turning over ways to give the depth of flavor and texture that sourdough lends to pretty much any and every baked good.  And given my undying love for donuts, they were one of the first things to be given the sourdough treatment once my starter was proven to be hearty.

Sourdough baked goods have a reputation for being time consuming and tempermental. While there are lots of recipes that require a practiced technique and a good amount of time, these raised sourdough donuts definitely don’t fall into that category. The dough comes together in literally minutes, and after a short rise you can choose your own adventure by either cutting out donuts then and there or chill the dough overnight. After another rise of about an hour, you’re ready to fry, frost, and eat those beauties.

How to Make Raised Sourdough Donuts

Start by mixing the dry ingredients–flour, sugar, and salt– together. Next, add in all of the wet ingredients -sourdough starter, milk, oil, and egg-at once. Stir until they cone together into a dough. It will be sticky and rough looking.

Turn the dough out onto a floured surface and knead with floured hands for two to three minutes, or until it looks smooth. You’re not going for a lot of gluten development, rather a well combined dough.

Tuck your ball of dough into a clean bowl and cover with a towel. Let it sit for 30 minutes to an hour. At this point, you can put the dough in the refrigerator for up to 24 hours.

Cutting out the Donuts

If you want to make the donuts right away, after the resting period roll the dough out on a floured surface to 3/8″-1/2″ thick. Cut out your donuts (see the section below on donut shapes) and move them to a baking sheet that’s lined with lightly floured parchment paper.

Cover the donuts lightly with a clean kitchen towel. Let them rest and rise for at least and hour. They won’t rise dramatically, but the dough should look puffed and give easily when you touch it with a gentle finger.

Before frying, set out a large baking sheet with a cooling rack over it and make sure that everything is ready for you to fry the donuts without being distracted. You are working with very hot oil, and need to avoid distractions while frying.

Heat at least 2″ of oil to 350° in a medium sized, heavy-bottomed pan. Use an instant read or fry thermometer to monitor the temperature of the oil. It will seem to heat slowly at first, but then more quickly as it gets hotter.

Use a slotted metal spoon or spatula to carefully set 2 or 3 of the donuts in and fry for about 90 seconds on each side, or until each side is golden brown. They will sink to the bottom at first, but should rise to the top of the oil after a few seconds.

With the same metal spatula, lift the donuts out onto the cooling rack. If you’re coating them in sugar or powdered sugar, let the excess oil drain off for about 10 seconds then put them directly into your sugar. The sugar will stick best to a hot donut.

Allow the donuts to cool, and glaze, frost, or decorate however you’d like.

Notes and Questions on How to Make Sourdough Donuts

Can you freeze sourdough donuts?

Yes, you can freeze your sourdough donuts! They freeze best when they are unglazed and unfilled, so wait to do that until after thawing them.

Allow the donuts to cool after frying, then freeze them in a single layer on a baking sheet. Flash freeze them for a couple of hours, then put them in an airtight container or freezer bag and store in the freezer for up to two months.

What is sourdough discard?

The yeast in a sourdough starter is kept active by feeding it more flour and water, which gives the healthy bacteria “food” to eat and stay active. This gives your sourdough baked goods their rise, rather than using store bought instant yeast.

When feeding your starter, you will remove a portion of the old, spent starter before adding the fresh flour and water. The part that you remove is called the discard. While it doesn’t have the rising power that an active, fed starter does, it can still be used in recipes to avoid waste and add flavor.

Can I let my donut dough rise overnight?

The sourdough donut dough can be left in the refrigerator overnight after the first resting period. This actually is best, as it helps the flavors develop and gives the gluten a chance to rest and relax after kneading, resulting in more tender donuts.

Though I made classic round donuts with a hole in the center, there are multiple shapes and sizes you can create! I would recommend doubling these sourdough donuts if you want to use them for any of the recipes linked below.

Other Recipes You May Enjoy (Click on Caption to View):

Raised Sourdough Donuts get all of their rise from natural leavening and are a great way to use your sourdough starter discard! They’re easy to make with a low-maintenance dough that comes together quickly.

In a medium mixing bowl, combine all of the ingredients. Stir until thoroughly combined, then turn it out onto a floured surface and knead briefly, about 2-3 minutes. The dough should be soft and supple, but not sticky. Cover it with plastic wrap to prevent drying out and allow it to rest for 30 minutes to an hour. After the dough has rested you can either put it in the fridge to rest for up to 24 hours or make the donuts right away.

To make the donuts, reflour your surface, then roll it out to 1/2″ thick. Cut them into large circles (I like to use a wide mouth jar lid), then use a smaller circle cutter to cut a hole in the middle. {If you want to make donut holes, I recommend skipping the rolling and simply divide the dough into 24 equal sized portions by cutting it into half, then quarters, then eighths, etc., until you have 24 donut holes.}

After the donuts are all cut, lay them out on a tray lined with parchment paper and lay a towel over them. Allow them to rise for an hour to an hour and a half. The rise will not be dramatic, but never fear! They will puff up beautifully once they hit the hot oil.

When you are ready to fry the donuts, lay out a tray lined with paper towels and have a pair of metal tongs ready. Pour about 2″ of canola oil into the bottom of a 3 quart pan. Heat it over medium heat until it reaches 350°, using a fry thermometer or instant read to monitor it. If it overheats, remove from the heat until it comes back down. Monitoring and controlling the heat will vary based on your stove top, so be patient as you figure it out! Also, BE CAREFUL!!! You are working with hot oil, and I don’t think I need to tell you that this is not a time to be distracted.

Drop 2-3 donuts into the hot oil at a time. They will sink to the bottom at first, then rise to the top as they begin to cook through. If they don’t, give them a little nudge with the tongs. Cook for about two minutes on the first side, then flip them with the tongs and fry on the second side for two minutes more, or until the donut is golden brown.

Make sure that the oil temperature is back up to 350° before cooking more donuts. This temperature is ideal, since it is hot enough that the donuts will cook quickly but not absorb much oil, and not so hot that the outside will burn before the inside is done.Remove to the lined tray and allow to cool. Fill, frost, and decorate to your hearts content! If you want to cover them with sugar, place them in the sugar and toss immediately after removing them from the frying oil.

Heat the milk in the bottom of a small pot until it’s simmering, then whisk in the powdered sugar. Add the vanilla extract, then dip the donuts in it. Allow them to set and the glaze to harden, then enjoy! 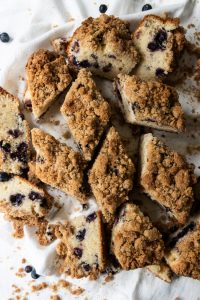 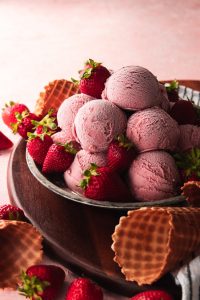