When I was growing up, my mom’s best friend made English Toffee every Christmas.  It was one of the best parts of Christmas during those years when somehow, eating essentially cooked down butter and sugar, topped with chocolate, didn’t make me think twice or gain an ounce.  What was my life?

Toffee is one of the best things all year round (see above regarding butter and sugar), though I seem to have misplaced the modicum of self-control that had become part of my life (see above regarding butter and sugar) until this year.  Having grown a human and brought him into this world a mere two months ago, I’m blaming any um, extra on him.  He’s down with it though– I asked and he just grinned and cooed.  So we’re all good over here.

This year I took the toffee and tossed it in popcorn before drizzling with chocolate.  Then I started dramatically started singing “A Whole New WORLD!” until my three year old informed me that it’s not a seasonally appropriate song.

But this really is the ultimate party food.  Maybe to ring in the New Year? Easy for snacking, classy and eye catching.  Highly addictive, so everyone will think that you’re some sort of magician who is blessed with culinary gifts from the gods.

Of course, some of it has to actually make it to the party.  I wish you luck with that part.

Place the coconut oil in a 12 qt. pot over medium-high heat with three kernels of popcorn in it.  Cover and allow the oil to heat until the three kernels have popped, then add the rest of the popcorn at once and cover quickly.  Shake vigorously nearly constantly while the popcorn pops.  Remove from the heat when the popping has slowed so that you only hear a pop only every 5-8 seconds.  Also make sure that you don’t smell any scorching and if you do immediately take the popcorn off of the heat.

Measure out 16 cups of the popcorn into a large bowl that’s not plastic, avoiding getting any unpopped kernels in your bow.  Set out two baking sheets (preferably with edges).

In a heavy bottomed pot, combine the butter, sugar, salt, and water.  Heat on medium, stirring with a wooden spoon constantly as the butter and sugar melt and begin to bubble. Continue cooking and stirring for about 3-5 minutes, or until the mixture has reached 300 degrees on a candy or instant read thermometer.  If you don’t have a thermometer, it is done when the mixture is the color of a raw almond skin.

Once the toffee is ready, slowly drizzle over the popcorn with one hand while quickly tossing it with a long-handled fork (a serving fork does nicely) to coat as evenly as possible.  You need to work quickly, as the toffee is somewhat thick and will harden quickly.

Once the toffee has coated the popcorn, pour half of the mixture onto each baking sheet.  Once the mixture has cooled enough to handle without burning your hands, break any large clumps up with your fingers.

Once the toffee has cooled and hardened completely, melt down the chocolate and drizzle about half over each of the sheets.  Lightly toss with a fork to spread out the chocolate more and allow it to harden.  Keeps for about a week in an air-tight container, if it lasts that long! 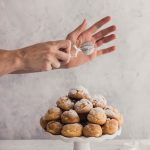 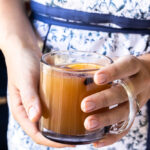